I have been traveling a bit this winter and my adventures have taken me to places where the temperature has dropped to almost single digits. One word: Brrrrrr.  Truth be told, though, I love stepping outside the comforts of home and the not-so-chilly 72°F weather we have here in LA in December and January (and year ‘round, for that matter). 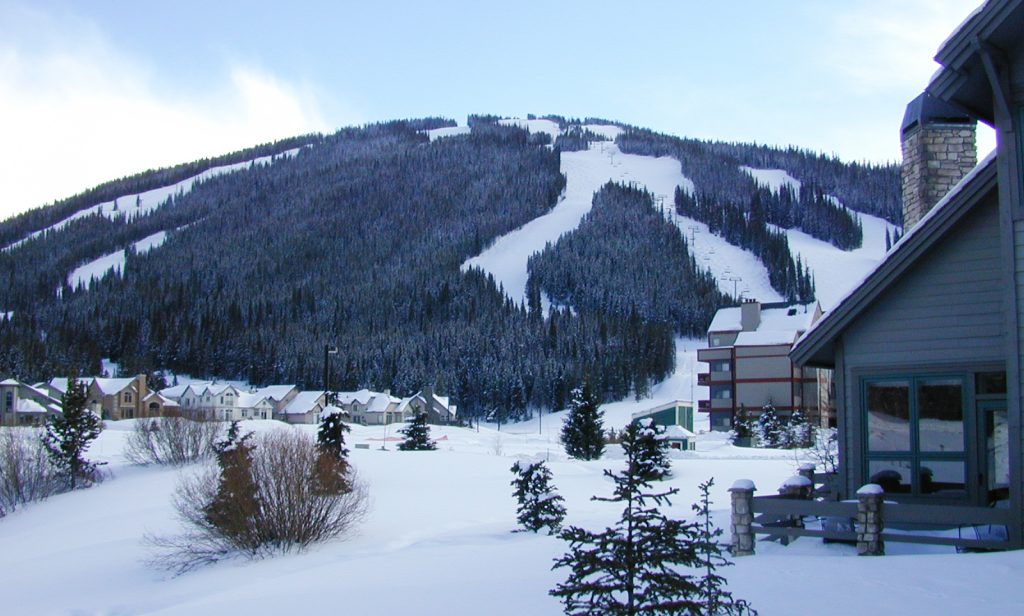 I know what some of you are thinking…how can I be complaining about warm, great weather during the Winter?  …especially when some of y’all are shoveling snow out of your driveway just to fight more snow, ice and cold just to get to work.

I completely understand that sentiment…I lived in Colorado for several years and did my share of scraping ice off the windshield until your fingers freeze.  While living in LA is great, and warm Winters are great, there is NO change of season….and that’s something I miss.  Because of the lack of seasons, I have come to realize that there are really no benchmarks that let you fully appreciate the passing of time and the ending of one season and the arrival of the next…thus, life blends into one long season where one day you wake up to realize five years have passed. 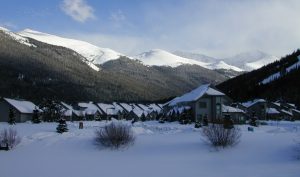 I want to get back to talking about Winter though.  There is something so peaceful and calming about freshly fallen snow.  I vividly remember stepping outside on those days in Colorado and hearing nothing.  It was so quiet, except for deer prancing in the distance or the occasional tuft of snowflakes that would fall from one branch to the next when they got a little too heavy.  I just love those days.  Nothing better than staying inside, bundling up in blankets by the Buck Stove (it’s a type of fireplace stove) and popping in a movie.  Happy, happy!

While Winter usually brings thoughts of warm soup, casseroles and stews, it’s nice to mix things up a bit.  And as nice and wonderful as the snow is, after a few days in the house, you can get a little stir-crazy and you start dreaming of glimpses of Spring and Summer on the horizon.

But just like Punxsutawney Phil and the anticipation of whether or not he sees his shadow on Groundhog’s Day, those dreams of Spring and Summer could be many months away.  Don’t let that discourage you because with this recipe, at least the Big Taste of Summer is just about an hour away.

I never really think about making BBQ Chicken in the Wintertime…even here in LA.  While daytime temps are in the 70s…nighttime can dip to the high 40s and 50s…so it gets cold.  And the last thing I feel like doing is going out in the “cold” to cook chicken.  So that’s why I love this recipe.  We bring it all indoors without sacrificing the great taste of BBQ Chicken….and I can have one of my favorites in the smack-dab middle of Winter.

How can we grill BBQ Chicken indoors, you ask? 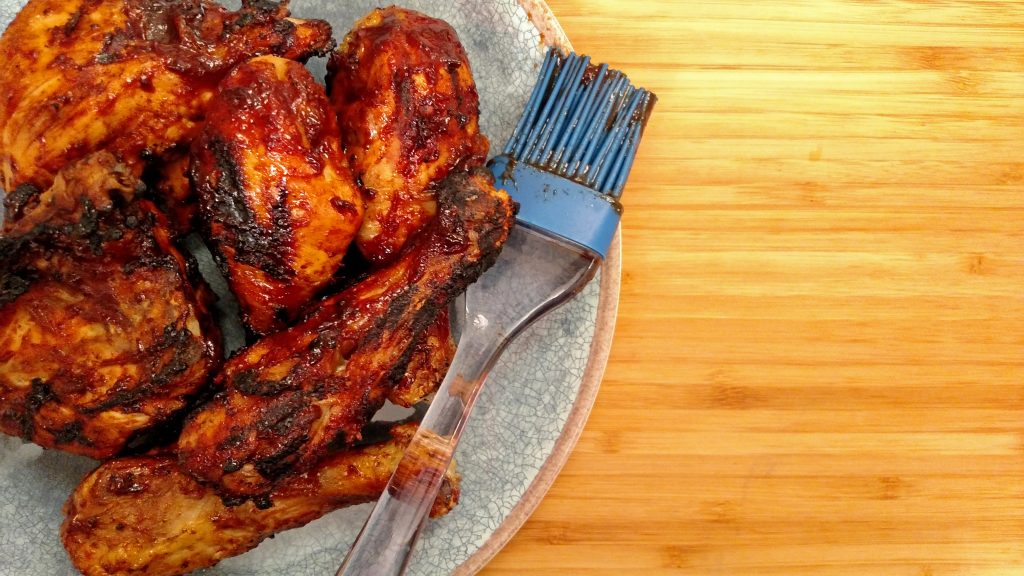 Very simply…we cook it first in the oven just like you were making baked chicken.  Then, you just finish it off on a hot grill pan so that you get that great char and caramelized BBQ Sauce.  Mmmm.  Mmmm.  So good. Because we cook it in the oven first, the chicken doesn’t smoke up as much as if you’re throwing raw chicken on a grill…so, we can grill it indoors.  You may still want to turn on the vent because you will get some smoke, but really not a lot.  The video was shot without using the vent, so it’s definitely not a necessity.

I’m telling you, this recipe is the bomb!  Even my sister, Barb, who I would not call a BBQ Chicken lover was raving about how good this BBQ Chicken turns out.  The cool thing about this recipe is how you can consistently make it great.  I know when I try to grill Bone-In chicken on a BBQ grill, without a thermometer, I’m never really sure when it’s done and invariably, you can end up burning the skin before the meat is cooked through.  This recipe solves that.  It is so consistently good that I wouldn’t be surprised if you brought this recipe into the summer months too.  I’m telling you, this is how I make BBQ Chicken in the Summer now too…but instead of using the indoor grill, I take it outside to the outdoor grill!  BBQ perfection!

A couple of notes about the chicken.  I highly recommend Bone-In and Skin-On Chicken.  It works the best for BBQing and give you the best Taste, I think.  Breast, Legs, Thighs or Wings…they’ll all turn out great.

I have tried it with Boneless Chicken Breasts and the Taste is still great, but it’s not quite as satisfying, especially since most boneless chicken breasts lack the skin…and that charred skin and the flavor it produces is half the charm of BBQ Chicken, even if you don’t eat it.  But, if you’re trying to keep it lean and mean in the New Year, use the boneless, skinless breasts…no judgment here!  Just encouragement!  Just don’t bake it as long, because you’ll find that by the time you grill it, you will have BBQed shoe leather.  So…just at the point that the juices start to run clear, take it out of the oven and finish it off on the grill pan.  Perfection!

I would wager to say this will become one of your favorite Winter recipes!  So stay warm and savor the Big Taste of Summer with this BBQ Chicken that you’re sure to love! 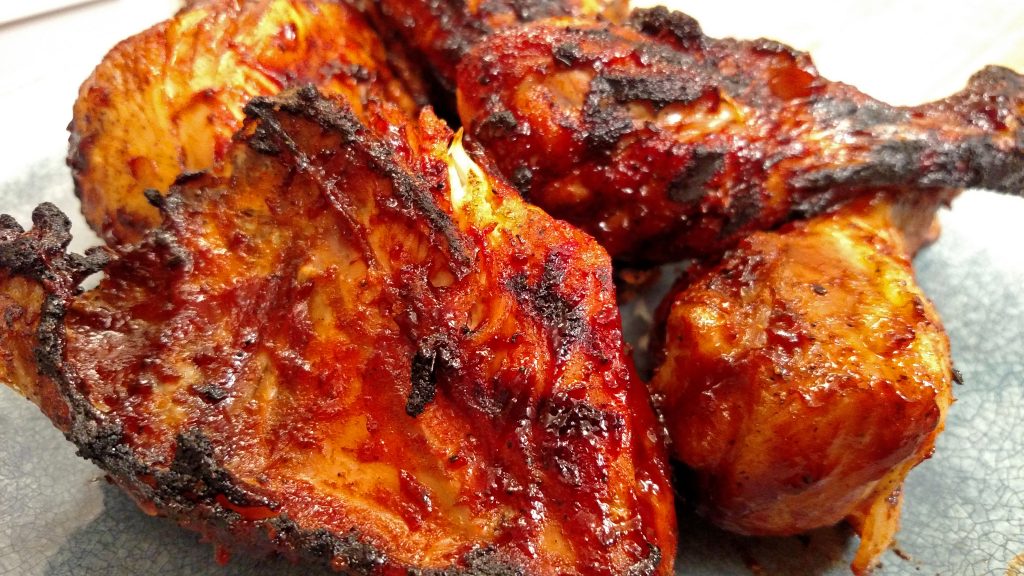 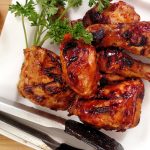 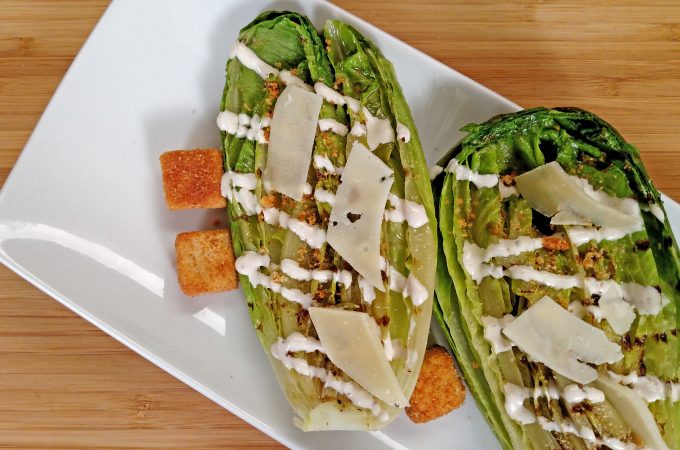 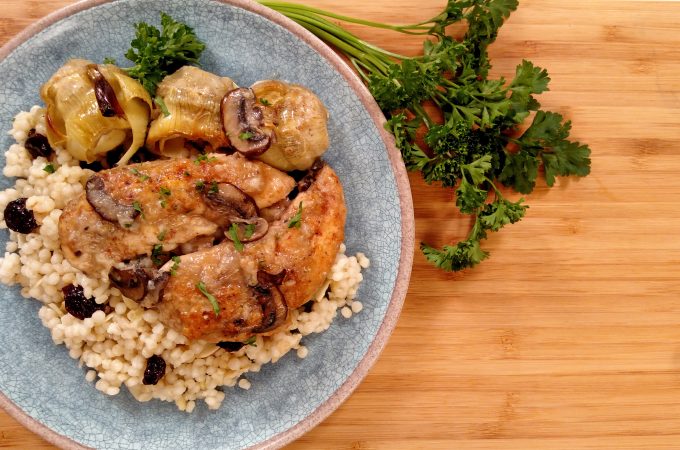